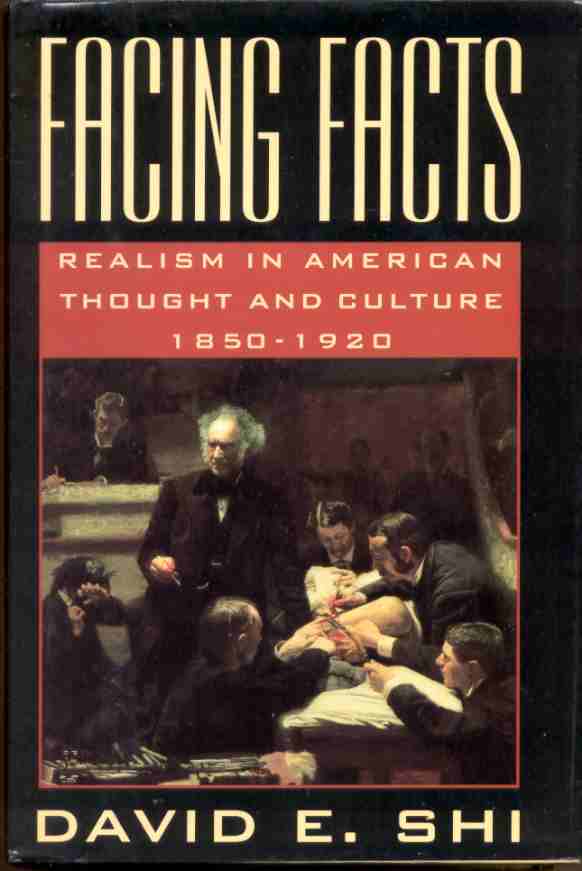 "A true poem," Walt Whitman proclaimed in 1852, "is the daily newspaper"--and American culture was never the same again. Like a blast of cold air in a stuffy drawing room, Whitman's campaign to give artistic representation to gritty reality shocked the genteel artistic elite of the 1850s; but the brassy poet's efforts helped generate a revolution in American life and thought. Four decades later, Willa Cather could declare that the "public demands realism, and they will have it."
In Facing Facts, David Shi provides the most comprehensive history to date of the rise of realism in American culture. He vividly captures the character and sweep of this all-encompassing movement--ranging from Winslow Homer to the rise of the Ash Can school, from Whitman to Henry James to Theodore Dreiser. He begins with a look at the idealist atmosphere of the antebellum years, when otherwordly themes were considered the only fit subject for art (Hawthorne wrote that "the grosser life is a dream, and the spiritual life is a reality"). Whitman's assault on these standards coincided with sweeping changes in American society: the bloody Civil War, the aggressive advance of a modern scientific spirit, the popularity of photography, the expansion of cities, capitalism, and the middle class--all worked to shake the foundations of genteel idealism and sentimental romanticism. Both artists and the public developed an ever-expanding appetite for hard facts, and for art that accurately depicted them. As Shi proceeds through the nineteenth century, he traces the realist revolution in each major area of arts and letters, combining an astute analysis of the movement's essential themes with incisive portraits of its leading practitioners. Here we see Oliver Wendell Holmes, Jr., shaken to stern realism by the horrors of the Civil War; the influence of Walt Whitman on painter Thomas Eakins and architect Louis Sullivan, a leader of the Chicago school; the local-color verisimilitude of Louisa May Alcott and Sarah Orne Jewett; and the impact of urban squalor on intrepid young writers such as Stephen Crane. In the process of surveying nineteenth-century cultural history, Shi provides fascinating insights into the specific concerns of the realist movement--in particular, the nation's growing obsession with gender roles. Realism, he writes, was in many respects an effort to revive masculine virtues in the face of declining virility.
During the twentieth century, a new modernist sensibility challenged the now-orthodox tenets of realism: "Is it not time," one critic asked, "that we renounce the heresy that it is the function of art to record a fact?" Shi examines why so many Americans answered yes to this question, under influences ranging from psychoanalysis to the First World War. Nuanced, detailed, and comprehensive, Facing Facts provides the definitive account of the realist phenomenon, revealing why it played so great a role in American cultural history, and why it retains its perennial fascination.