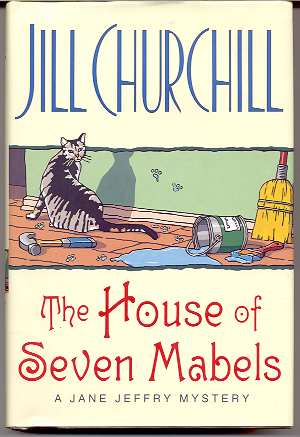 Homemaking is about to take on a whole new meaning for Jane Jeffry now that she's agreed to help restore and redecorate a decrepit old neighborhood mansion. The home's owner, the prosperously divorced Bitsy Burnside, considers herself to be a feminist to the max and wants an almost all-female crew to do the dirty work -- prompting the quick-witted Shelley Nowack to dub the project "the House of Seven Mabels." With her best friend and decorating whiz Shelley on the estrogen-heavy team, Jane thinks this exhausting, plaster-dusty job may not be as unpleasant as it initially appeared to be.

Until, of course, things start to get very messy. It begins with a series of mean-spirited "pranks" -- strange odors, mysterious electrical shorts, a myriad of petty annoyances designed to impede the progress of the fixer-uppers. And then the pranks turn deadly, leaving one of the workers lying lifeless at the foot of a staircase.

Tragic, yes, but an accident? Jane thinks not. And with the able assistance of Shelley, not to mention a little help from her best beau, Chicago detective Mel VanDyne, Jane's hoping she can construct a solid case and nail the assassin. Suspects are certainly in abundant supply. The surviving members of Bitsy's building brigade all had the opportunity. Joe Budley -- the contractor originally hired, then fired when Bitsy had her "no men allowed" epiphany -- had a motive. But the more Jane saws away at the truth, the more complicated the criminal blueprint appears. And she may be painting herself into a comer, leaving no exit if a crafty killer decides to make Jane Jeffry the next demolition project.

Title: THE HOUSE OF SEVEN MABELS