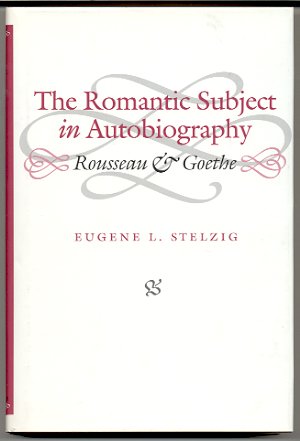 Although the literature of modern subjectivity has its sources in the Renaissance and manifests itself in texts as early as Montaigne's Essays and Shakespeare's Hamlet, autobiography as we know it is one of the significant developments of the later eighteenth century. Indeed, the rise of writing about the self is an important indicator of the transition from the culture of the Enlightenment to that of Romanticism.

Arguing that Rousseau and Goethe are the foremost practitioners of Romantic autobiography, Eugene L. Stelzig offers the first comparative study of these foundational figures. Although the term 'Romantic autobiography' has been in use for some years, there has been no developed critical or generic discussion of it, nor of Rousseau's, Goethe's, and Wordsworth's writings as the leading examples of the genre. Stelzig provides an overview of how these authors fashioned a distinctive type of self-writing at the historical moment when modern autobiography emerged in its identifiable form.

Within this historical and critical context, Stelzig analyzes in depth Rousseau's and Goethe's conceptions of the genre and their autobiographical output, merging close critical reading of selected episodes with psychobiographical analysis. He shows how both writers' presentations of their relationships with others are at times defensive and self-seeking and indicate a truth more complex and ambiguous than they are willing to acknowledge. In particular, Stelzig demonstrates how Goethe exploited the resources of fiction to emphasize and highlight the subjective and personal in his work, a practice Rousseau engaged in only covertly.

Stelzig analyzes the major episodes of Rousseau's Confessions in light of his philosophical writings and the biographical record and offers a revisionary reading of his brilliant but largely unknown Dialogues. Stelzig's chapters on Goethe's monumental portrait of his early years, Poetry and Truth, constitute the fullest critical discussion extant of Goethe's ambitious project and of the ideal of Bildung (education, development) that informs his life narrative. Stelzig concludes with a discussion of Goethe's presentation of his complex relationship with his parents and sister and the romantic involvements that play such a prominent role in his autobiography and in the public legend of his life.

Title: THE ROMANTIC SUBJECT IN AUTOBIOGRAPHY: ROUSSEAU AND GOETHE

Description: Near Fine Hardcover in Near Fine Dust Jacket. Binding straight and tight; corners and edges sharp. No marks or writing. ; 279 pages

Keywords: Romanticism Self In Literature,