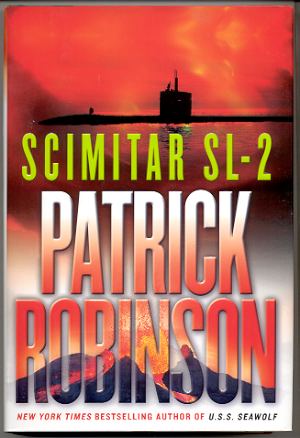 Amid the Canary Islands lies the massive crater of thevolcano Cumbre Vieja. Scientists theorize that one day the volcano will erupt, triggering a series of events that will lead to a tsunami higher than any in recorded history. This mega-tsunami, with waves of more than 150 feet in height, would ravage Europe, Africa, and ultimately the East Coast of the United States, causing immeasurable loss of life and destruction ...

After Professor Paul Landon, the world's most prominent geophysicist, is found with a bullet in his head, it is discovered that Ravi Rashood -- America's nemesis and the former SAS officer who is now the head of Hamas -- has hatched a diabolical plot against the West: to fire a nuclear-tipped guided cruise missile -- Scimitar SL-2, named for the curved sword of the Muslim warrior Saladin -- into Cumbre Vieja.

United States Admiral Arnold Morgan, the retired National Security Adviser, and the Pentagon know it's not a joke when Rashood, accompanied once again by his wife, the Palestinian Shakira, explodes Mount St. Helens. Morgan knows something even more horrific is to come.

But stopping them won't be easy.

Rashood and his Hamas crew are deep in the ocean, in an undetectable sub, which he managed to procure from Russia via communist China. Perhaps worse, a new President, a weak-willed liberal in the White House, worries about taking a stand. As the terrorists' deadline approaches, the newly implemented and unseasoned National Security team must consider the unthinkable. They must assume the daunting task of organizing a mass relocation of major population centers along the East Coast to safer ground.

Morgan once again finds himself at the center of a desperate cat-and-mouse chase, battling his greatest enemy yet as he races against time to locate the silent underwater marauder and stop Rashood before the unimaginable happens.

With his trademark authentic research and grasp of military hardware, geopolitics, and cutting-edge science, Patrick Robinson is at the top of his game with this new tale.