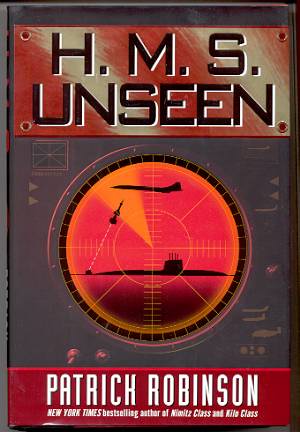 It's the deadliest ship in the world. You cannot see it. You cannot hear it. And it's just fallen into enemy hands.

Patrick Robinson became an instant hit with his widely acclaimed New York Times bestseller Nimitz Class and then did it again with his second gripping novel Kilo Class. Now this nationally bestselling author returns with his most suspenseful naval technothriller yet--a tense, unpredictable adventure that rivals the best of Tom Clancy and Dale Brown.

The most highly efficient and lethal underwater ship ever built--even better than the Russian Kilo Class, and nearly impossible to detect--the 2,500-ton H.M.S. Unseen is one of only four diesel-electric submarines ever owned by the Royal Navy. While out on a training mission off the coast of England, the unthinkable happens: The ship vanishes into the depths, baffling British and American military intelligence, including wily National Security Adviser Admiral Arnold Morgan.

"Submarines are very, very dangerous and very, very sneaky. You just don't want 'em wandering around on the loose when no one knows where they are. You have to keep an eye on them. If there's one thing that makes me real nervous, it's a submarine that's somehow gone off the charts."

One year later, Morgan's foreboding is about to be proven deadly.

On a routine flight, the Concorde, the world's safest and most secure domestic plane, disappears without a trace over the frigid waters of the North Atlantic. A few months later the brand new Starstriker jet, a miracle in American aeronautic technology and supersonic travel, vanishes. Both appear to be random, inexplicable accidents, until another plane--Air Force Three, carrying the vice president of the United States--is blown from the sky.

Searching for answers, the brilliant, irascible Morgan devises a chilling theory. Not only is Unseen still out there, but it's been modified to become the most dangerous anti-aircraft weapon at sea. And the admiral is convinced that only one man could have masterminded it: The world's most cunning--and reportedly dead--terrorist spy, Iraqi's Commander Benjamin Adnam, the incomparable operative who hired a nuclear sub and destroyed the carrier U.S.S. Thomas Jefferson a few years before.

Determined to stop his old nemesis before he strikes again, Morgan must use all his wits to find Adnam and the rogue sub hiding somewhere in a million square miles of dark ocean water, a mission the admiral knows is about as easy finding a needle in a desert--blind. But what Morgan doesn't know is that the fanatically religious military terrorist has a chilling agenda of his own--a plan that will bring these two intense warriors face to face.and only one will come out alive.

A breathtaking tale that races from the shifting sands of the Middle East to deep within the black waters of the North Atlantic; from the Oval Office to the bowels of one of the most powerful warships ever built; H.M.S. Unseen will keep readers guessing as they race to discover its powerful, stunning conclusion.