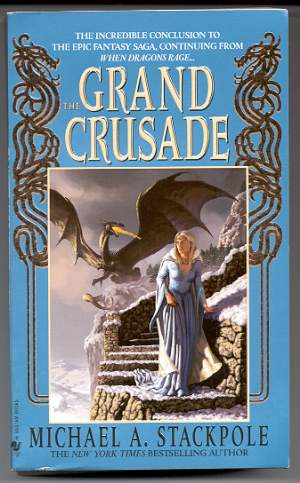 By: Stackpole, Michael A

In this incredible conclusion to the epic fantasy saga, continuing from When Dragons Rage, "New York Times "
bestselling author Michael A. Stackpole returns to a world of mystery, prophecy, and magick, where dreams-for better or worse-can come true...
The Grand Crusade
The hope of the future, Will Norrington, prophesied to bring down the northern tyrant Chytrine and redeem the world, is said to be dead, lost in the heart of a fiery volcano. The news has thrown the Council of Kings into a furor and drained the spirit from once united factions. As questions swirl about as to Will's legacy, and even his identity, one thing is clear: a divided alliance lacks power. And this may be exactly the opening Chytrine needs to seize control-and capture the empowering artifact, the DragonCrown-once and for all. Still, Will's friends and comrades remain true to his cause, preparing to continue the fight. Among them is the Vilwanese hero, Kerrigan Reese, and Alyx, groomed to lead an army. Sayce, pregnant with Will's child, must remain behind as the new custodian of the Norrington future in case they fail. But even as they draw up battle plans, with the enemy nearer than they think, a shattering betrayal-and a stunning revelation-may change the course of everything.

"From the Trade Paperback edition."