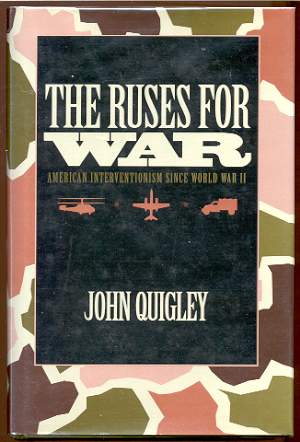 By: Quigley, John B

As a prelude to war in 2003, the administration of George W. Bush did its utmost to convince the public that Saddam Hussein's Iraq posed a threat to American security from the secret development of weapons of mass destruction. Within a year of the U.S. invasion of Iraq, it became clear that no such weapons existed. Sadly, this was not the first time the American public was urged to support a war for reasons that turned out later to be scarcely credible. As law professor John Quigley amply demonstrates in this damning indictment of U.S. military interventionism since World War II, the Bush administration's actions fit a decades-old pattern of going to war on a pretense rather than informing the public of the government's true intentions.
This newly updated and revised paperback edition of The Ruses for War analyzes each instance of military intervention abroad by the United States since World War II from the perspective of what the government told the public, or did not tell it, about the reasons for war. Quigley concludes that the government's explanations differed greatly from reality.
Why were American troops committed to Korea in 1950? Was it to stop the onslaught of world communism, as President Truman claimed? Why did the U.S. Marines land in the Dominican Republic in 1966? President Johnson argued that it was to protect Americans in danger. This is the same defense used by President Reagan when he sent troops to Grenada in 1983. Quigley also analyzes the stated versus actual reasons for intervention in the first Gulf War, Somalia, Kosovo, and other trouble spots.
What emerges from his research is a tale of coverups, distortions, and manipulation of the media by our country's leaders for the purpose of gaining public support.

Description: Very Good Hardcover in Very Good DJ with light edge wear, no tears or chips. No marks or writing. Scan shows actual copy. ; This compelling book explores US military actions taken over the last half-century, focusing on the reasons given for these operations by the then current administration.