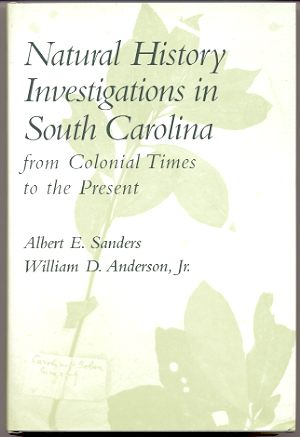 From 1565 -- when Jacques Le Moyne drew the first known European illustrations of North American plants and animals -- to modern times, South Carolina has been an important center for the study of natural history. Natural History Investigations in South Carolina from Colonial Times to the Present relates the story of the state's professional and amateur natural history investigations, especially in the fields of zoology and botany. Albert E. Sanders and William D. Anderson, Jr., describe the lure of South Carolina's diverse flora and fauna; the impact of social, political, and economic events on work in natural history; and the pivotal role Charleston has played in the making of the state's scientific heritage.

Sanders and Anderson chronicle early endeavors by local residents and tell how Mark Catesby's illustrations, together with specimens sent by Alexander Garden to Carolus Linnaeus, brought South Carolina plants and animals to the attention of scientists throughout Europe. The authors recount the Charleston Library Society's interest in the mysteries of nature and document the findings of the fertile decades between 1830 and 1860, including profiles of the people -- John E. Holbrook, John Bachman, Edmund Ravenel, Lewis Gibbes, Francis S. Holmes, Henry Ravenel, John and Joseph LeConte, and Robert W. Gibbes -- who formed a scientific community next only to those in Philadelphia and Boston.

The authors credit a handful of dedicated naturalists throughout the state and at the Charleston Museum with the resumption of scientific inquiry at the turn of the twentieth century and trace natural history through the present day.

Title: NATURAL HISTORY INVESTIGATIONS IN SOUTH CAROLINA From Colonial Times to the Present

Description: A New, Unread Copy. No marks or writing; no wear or tears. Fascinating account of the history of natural history in South Carolina from colonial times to the present. Illustrated in black &white. ; 333 pages