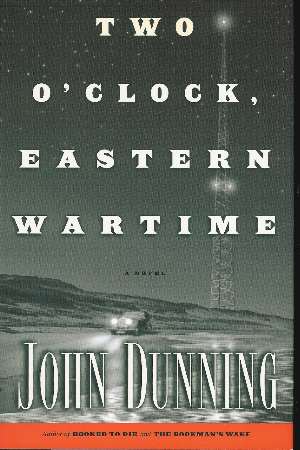 Widely acclaimed for his groundbreaking crime novels "Booked to Die" and "The Bookman's Wake," award-winning author John Dunning triumphantly returns with a riveting new thriller that takes us back to the summer of 1942, when radio was in its prime, when daylight saving time gave way to "wartime," when stations like WHAR on the New Jersey coast struggled to create programming that entertained and inspired a nation in its dark hour.

Into this intense community of radio artists and technicians in Regina Beach, New Jersey, come Jack Dulaney and Holly Carnahan. They are determined to find Holly's missing father, whose last desperate word came from this noisy seaside town. Holly sings like an angel and has what it takes to become a star. Jack -- a racetrack hot-walker and novelist who's hit every kind of trouble in his travels from sea to sea -- tries out as a writer at WHAR and soon discovers a passion for radio and a natural talent for script writing.

While absorbing the ways of radio, from writing to directing, he meets some extraordinarily brave and gifted people who touch his life in ways he could not have imagined -- actresses Rue, Pauline, and Hazel; actor-director Waldo, creator of the magnificent black show "Freedom Road; " and enigmatic station owner Loren Harford, among others.

Jack's zeal for radio is exceeded only by his devotion to Holly, who needs his help but who is terrified for his safety. Strange things are happening in Regina Beach, starting with an English actor who walked out of the station six years ago and was never seen again. And Holly's father is gone too, in equally puzzling circumstances. As Jack and Holly penetrate deeper into the shadows of thepast, they learn that someone will do anything, including murder, to hide some devastating truths.

In a stunning novel that transcends genre, John Dunning calls upon his vast knowledge of radio and his incisive reading of history to create a poignant, page-turning work of fiction that sheds new insights on some of the most harrowing events of the twentieth century. Like E. L. Doctorow's "Billy Bathgate" or Caleb Carr's "The Alienist," Dunning's brilliant tale of mystery, murder, and revenge brings to life another time, another place, another world.

Description: Light edge wear along top of DJ edge. No marks or writing.